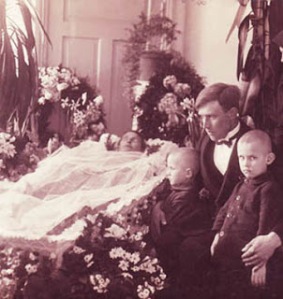 Obstertic Haemorrhage has been described as very sudden, unexpected, and alarmingly copious. It has been summed up as “flooding.” Many women died from this disease because midwives and physicians lacked common skills. In most child births, twenty minutes after the baby has been born, the body usually expells the placenta. However, this isn’t always the case, if the placenta hasn’t emerged after a half an hour, midwives and physicians are advised to remove the placenta themselves through pressure and gentle mechanical help that excites the contractions of the uterus and at once stops the flood of blood. If this isn’t done then the mother bleeds to death because the heart no longer has any blood and thus stops pumping.
A woman who was forty-two died from Obstertic Haemorrage even though she had delivered twelve of her previous babies all by herself. After she had successfully delivered her thirteenth child, she herself pulled the placenta out by the cord. Unfortunately, as she pulled the cord, it snapped. The woman resumed her role as a wife and went on with her housework, thinking nothing of the placenta still inside her. Consequently, as she worked she fainted from the haemorrage.